The 10 sen coin was one of the initial coins minted under the new monetary system.  The 10 sen continued until all denominations below 1 yen were made obsolete under the current monetary system.
​
The first design (for 1870) featured both the dragon and rising sun, similar across all denominations.  None were minted dated 1872 (M5), and by 1873 the rising sun was abandoned in favor of a denomination design.  The next design shift dropped the dragon in favor of a rising sun/denomination combination.  In later years silver was no longer used in the minting process and both the classic dragon and rising sun motifs were abandoned.
JNDA 01-23.  Shallow and deep scale variants exist, with the deep being the more difficult to obtain. 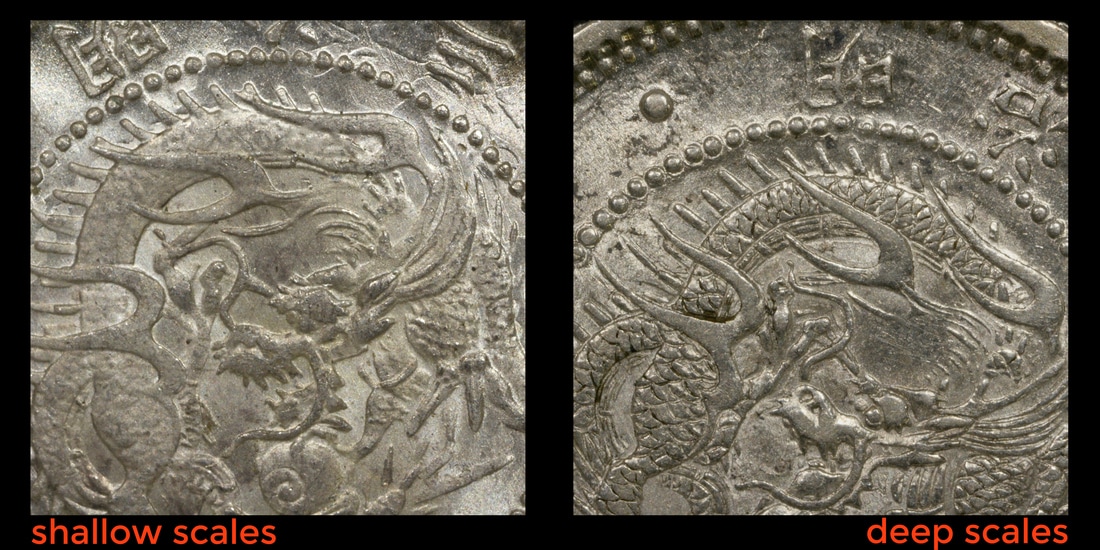 JNDA 01-24. The second design for the 10 sen coin (as with the other silver denominations) retains the dragon obverse but changes the reverse to a large character denomination/crest/wreath design.

Diameter 17.57 mm, 0.800 fine silver, 2.7 grams
JNDA 01-25.  The dragon obverse has been replaced with the Rising Sun obverse.  The diameter is the same but the weight and fineness have been reduced vs. the dragon style.

Total mintage for both years was over 60,000,00, yet the coins are extremely scarce and extremely costly.  As yet, I have not seen one for sale.  It is included here for completeness, as it does carry a JNDA number.
JNDA 01-27. Minted in both the Taisho and Showa eras, the 10 sen has the same design as its contemporary 5 sen. The coin is no longer made of silver, and a center hole has been added.  The hole of the obverse is surrounded by the 'Sacred Mirror' emblem, which is one of the Imperial treasures. The phrase 'Dai Nippon' or 'Great Japan' is above the hole, and under the hole is the date. The reverse shows the Chrysanthemum crest (the Imperial Seal) above the hole with the denomination below. Underneath is foliage of the paulownia (the Paulownia represents the government).

Cupro-nickel alloy.  Diameter 22.17.  Weight 3.75 grams. ​
JNDA 01-28. A five year issue with the obverse featuring stylized waves along with the issuing authority and date. The reverse has the denomination with the chrysanthemum and paulownia symbols representing the Imperial family and the government respectively.

Nickel.  Diameter 22 mm.  Weight 4.02 grams.
JNDA 01-29.  A three year series, with yet another change in metal content.  The obverse has a double petaled cherry blossom surrounding the center hole and a small paulownia crest on either side.  The issuing authority and date are above and below.  The reverse has the chrysanthemum crest and denomination over a wave with sun rays as background.

Aluminum-bronze.  Diameter 22 mm.  Weight 4.00 grams.
JNDA 01-30. Chrysanthemum blossom on one side, double petaled cherry blossom on the other. Another wartime issue that was minted for three years. Made with aluminum, this coin also went through multiple weight reductions as did the concurrent 5 sen.

Tin.  Diameter 19 mm.  Weight 2.4 grams.
JNDA 01-32. This is the last 10 sen coin produced. The obverse features an Arabic numeral '10'.  Also notable is that above the 10 is the legend 'Nippon Seifu' or 'Government of Japan' (vs. the 'Dai Nippon'/'Great Japan' on the prior issues). This is a short term legend which was used until the new constitution was written and new government formed.