The 'Sun-face' is a recurring motif for many Central and South American coins, including Uruguay.  Included below is an 1869 example.  The coinage of 1930 showed a definite French/Art Deco style and though the Sun-face itself did not make an appearance, the sun/rays were continued in the 5 peso and 10 centesimos as a backdrop to the main design figures.  1936 re-established a more central sun motif on the smaller (1 and 5 cts) denominations, while continuing a somewhat reduced size version of the 1930 coin.  The modern 10 peso coin continues this design as a bimetallic (picture pending).

Below are several examples of various denominations.

1930 marked the celebration of the Constitutional Centennial, with all three denominations featuring designs honoring the event.

NGC generally certifies essais as MS, and the MS population in gold is 4 (58, 62, 63 and 64).   No gold essais are listed in the PCGS population report.  PCGS tends to designate essais as SP (specimens).

This particular coin resides in an older NGC slab and is uniquely, if incorrectly, designated as a proof.  The coin is not however listed as a proof in references, so the 1930 10  centesimos is not shown on the website under the proof tab.  The NGC certification verification tool does confirm the coin was graded PF 65.  Next time I'm at a coin show I plan to take it to them to get re-slabbed and correctly attributed.

I have held the 62 in my hands (well, in a slab), and have seen very good photos of the 58 and one of the other two.  This 65 does appear to be the superior coin in terms of condition and is consistent with the grade given if it were MS, despite the poor photo through an old/scuffed slab (striations are on slab, not the coin).

​The 1936 mint state vs. proof/specimen 10 centesimos
Both NGC and PCGS certify these as either proof (NGC) or specimens (PCGS) in addition to the mint state.  Versus the the similarly designed 1930 coin, these are reduced in size, do not have the centennial verbiage and were minted in Austria rather than France.  The specimen or proof is unlisted in Krause and I do not have mintage figures.  They are also absent from the NGC pricing guide as that is powered by the Krause database.

The photos are limited by the scratched up slabs (they are fairly old slab styles).  Difficult to see, but the edges do appear to be reeded, which is most visible on the PCGS specimen given the slab design, as are the circulating specimens.  I can't confirm ALL of them are reeded, but it does not appear to be variable.  Apparently my obsession has led to me acquiring something of a grading set.  I 'need' a 64, and if there is ever a 68 made, well, then that too.

Below shows an NGC MS, several NGC PF versions, plus the token PCGS slab.  The slabs are in horrendous condition and the flaws seen are primarily on the slabs themselves.

Will be adding more information...what little bit I have found (or not found) in catalogs and/or via correspondence.  Not much, but that is part of the fun of coin collecting.

The Monedas de la Republica Oriental del Uruguay  website (use Chrome and it will translate for you) has the basic information on the coins.  Under the essay/essai section there are no listed 1936 examples.  Nor are these engraved essai as were other issues, but the 1930 essais were minted in France, vs. Austria for these.

There is an obscure, minor message board thread regarding these at Collector's Universe.  Since that posting, more of these were purchased. So, if I had to guess the final story is that in 1930 the Centennial design was created and minted in Paris, with Morlon as the engraver.  For 1936 the coins were reduced (per Uruguay Mint notes) and modified (removal of the Centennial motto) and minted in Austria.  Per the sources contacted, it does sound as if a small amount of unlisted proofs had been kept by a mint worker and eventually dispersed.  The Austrian Mint was unable to confirm/deny such mintings, which may have had more to do with the fact it was 1936 and Austria rather than lack of production--or they were done on the sly.  A future project will be to collect the original emails and copies of the relevant Mint notes and attach here. 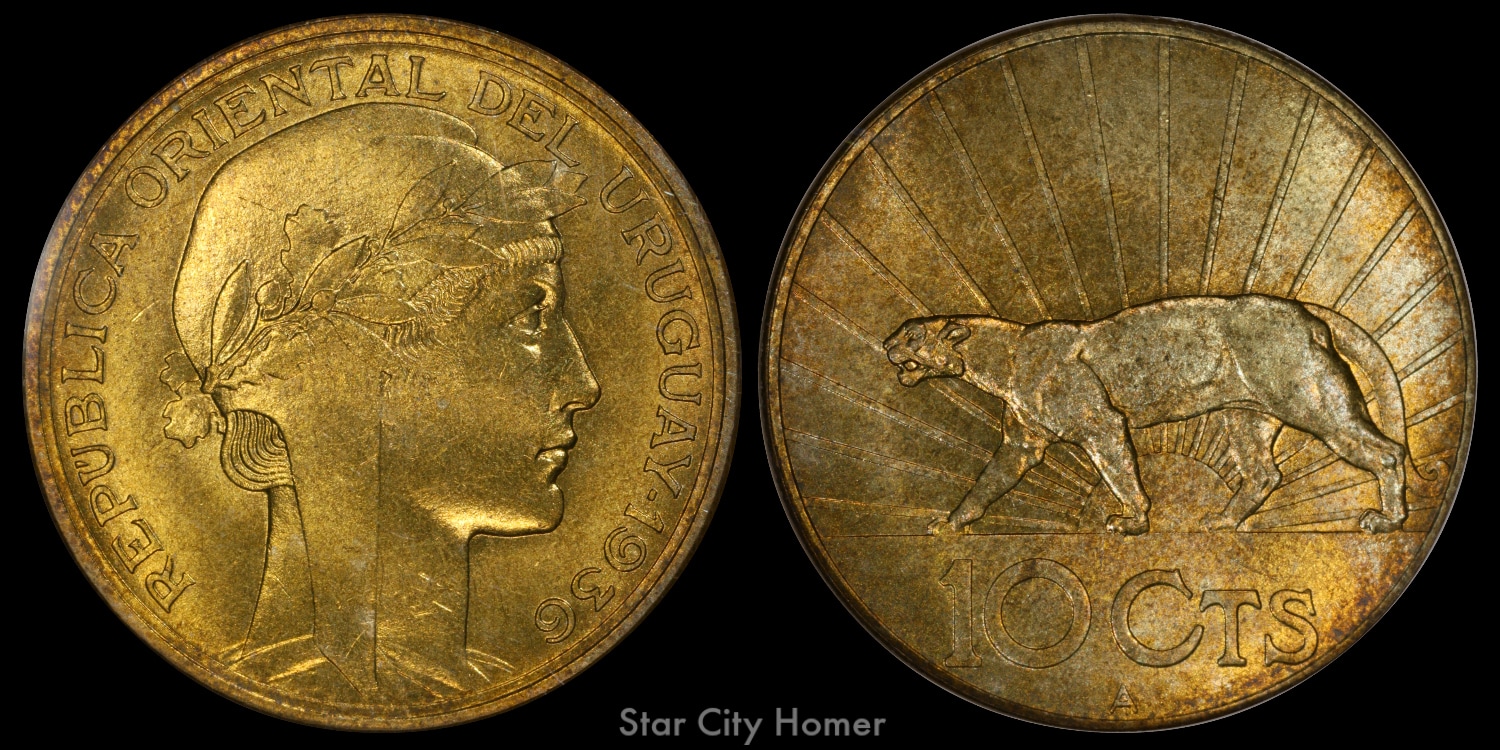 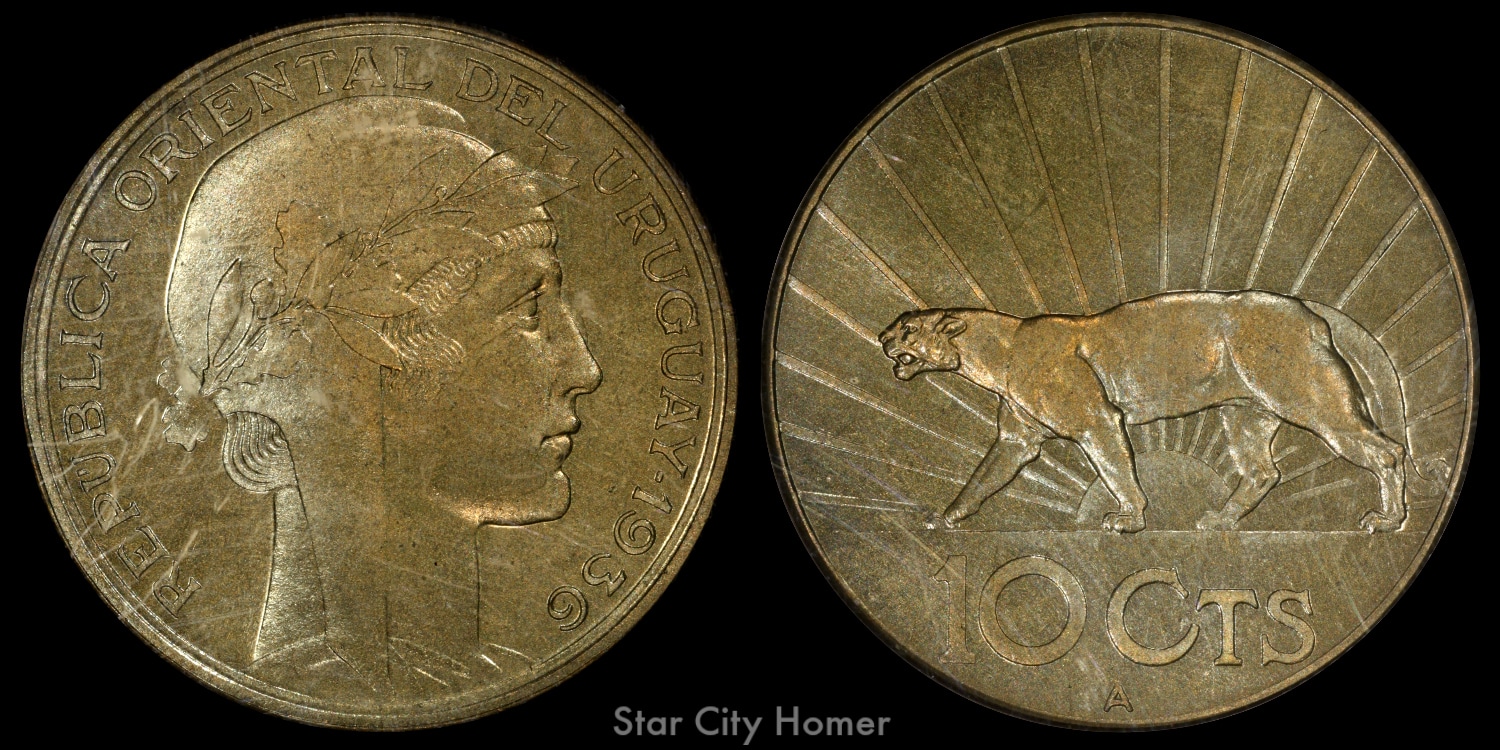 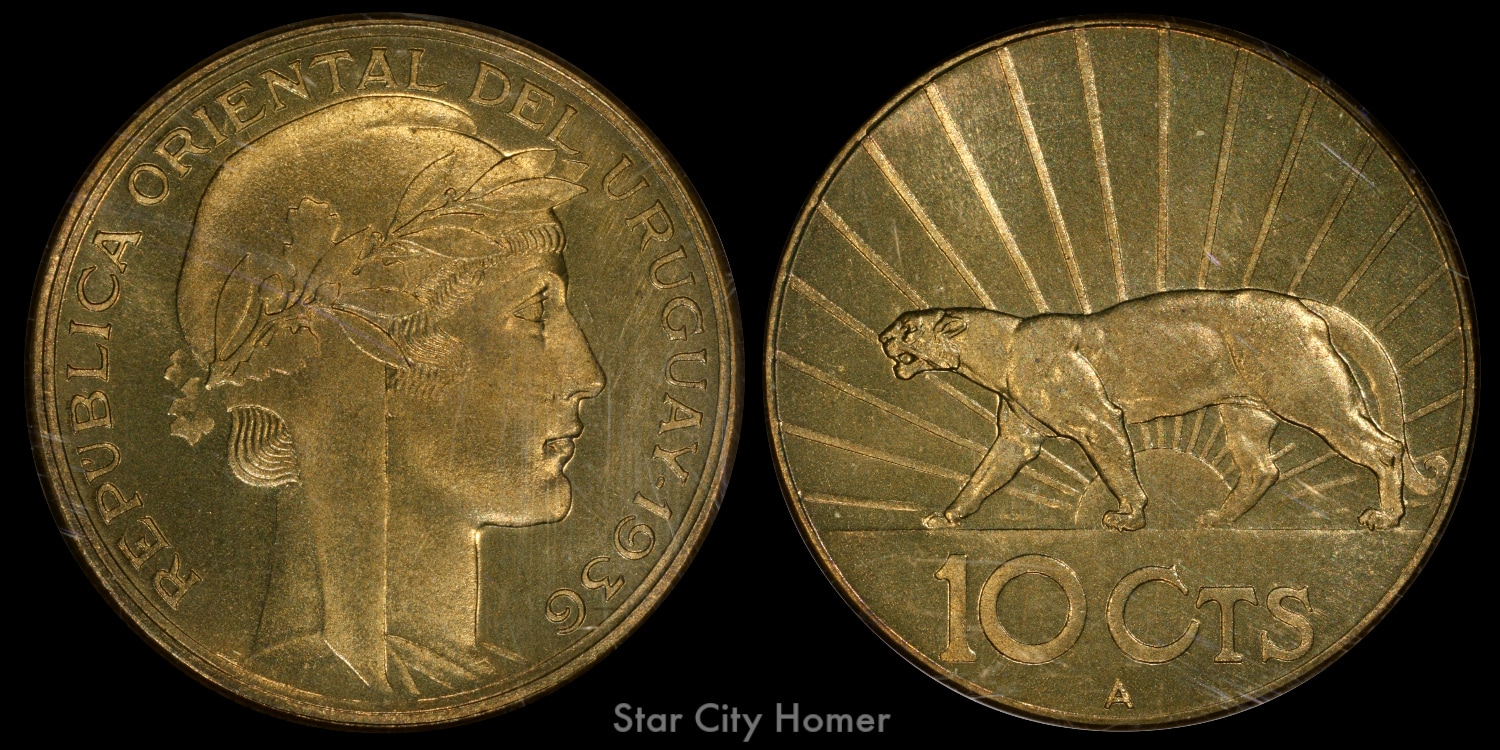 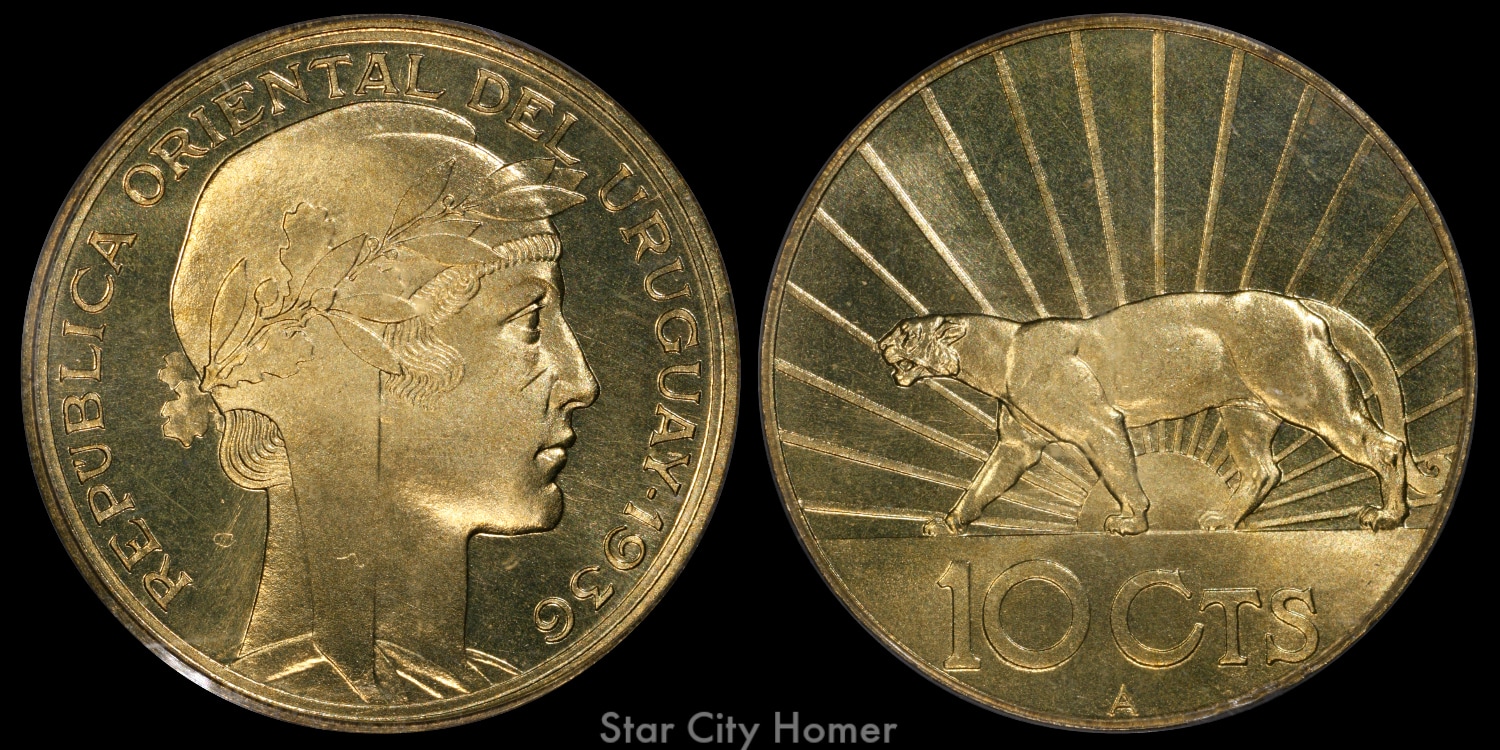 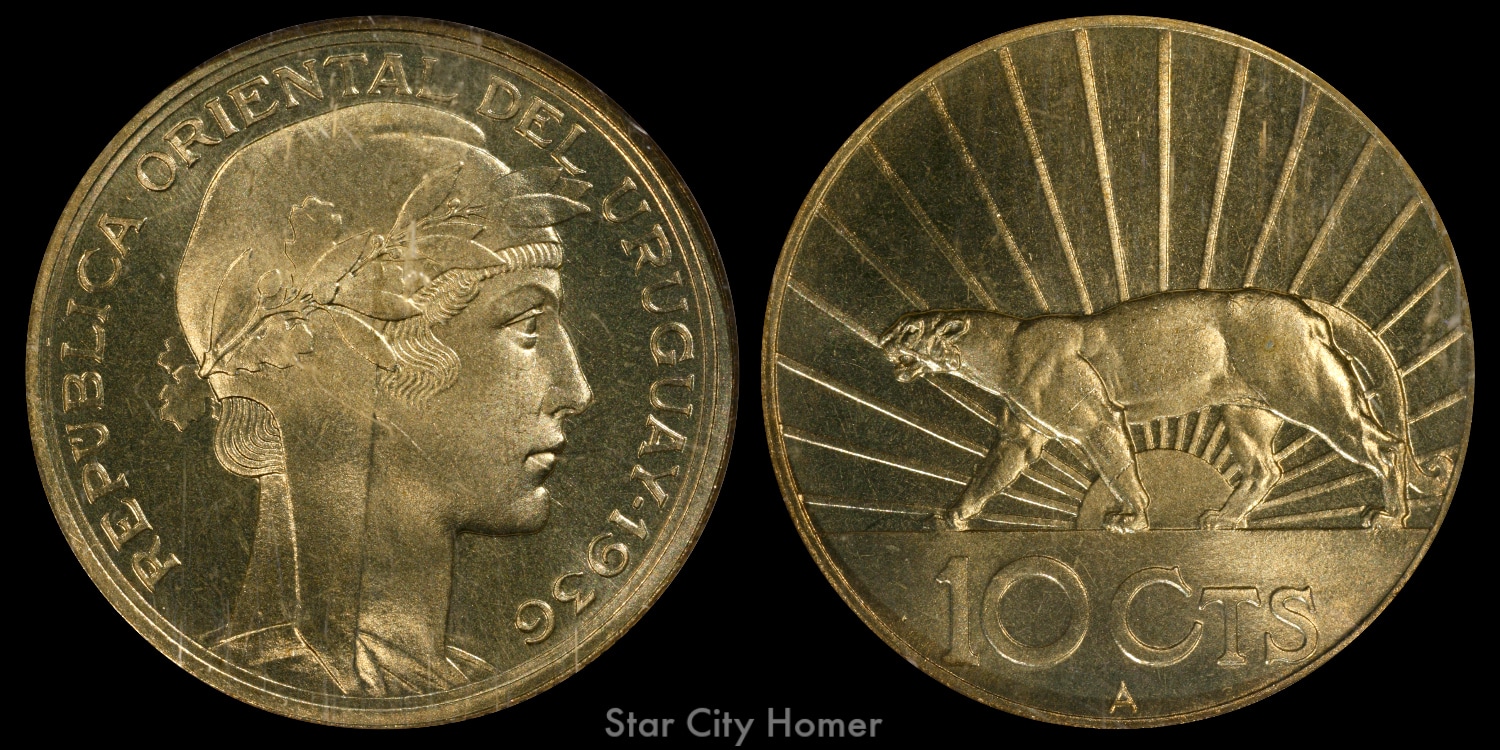