Page in progress, looking for more illustrations as not too many examples of variations in hand!
With the Meiji Restoration came a revising of the monetary system including adopting a decimal system.

​The basic unit was the gold yen, with the sen being 1/100 of a yen, and the rin being 1/10 of a sen.  Gold coins were to be minted in 20, 10, 5, 2 and 1 yen values, with design, weight and fineness as determined by the government and serving as legal tender.  Coins minted under the 1 yen denomination were 'subsidiary coins' meant to facilitate transactions and theoretically had limits in a larger transaction (ie up to 10 yen in silver coins or 1 yen in copper).

The 1 yen silver coin was initially to be minted in a limited fashion as a coin used for trade at the treaty ports, and were not legal tender outside those ports.  The values were set at 100 silver yen = 101 gold yen.  This became problematic later when larger amounts of silver were discovered and the price of silver dropped, resulting in an exodus of gold from Japan.

In Meiji 11 (1878) the silver one  yen coins and trade dollars were made legal tender throughout Japan.  The coinage act of 1897 removed the silver yen as a legal tender denomination.  The silver yen struck from 1901 (M. 34) and later were minted for use in overseas areas (i.e. Taiwan and Korea), and were not for domestic use.
The Gold Yen

Meiji 4 (1871), NGC MS-65.  High dot variety.  This example has some interesting doubling on the reverse.  A newer photo of this coin is posted on the gold page.  For now at least, I'll keep this one here as it is a good contrast in how different photos can make the same coin look. 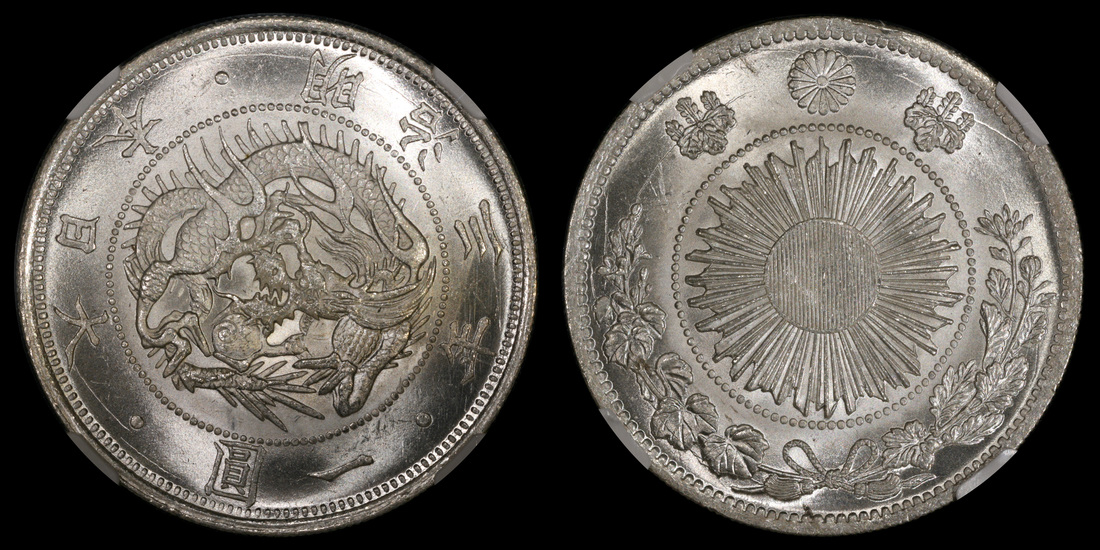 Meiji 3 (1870), NGC MS-65.  Type I.  This example has some rather interesting die cracks.
The Meiji 3 dated coins were (per one resource) minted from year 3 through year 5.  Originally intended as a trade coin, it was legal tender in Japan from M.11 through M31.  The basic categories of variety are I, II and III.  Type III is incomplete or 'lacking' in that it is missing the lower of the two horizontal strokes, marked as present with the red arrows in the above photos.  Type I is notable for the shorter stroke at the lower aspect of the character, vs. the more equal length noted on Type II, as marked by the blue arrows above. 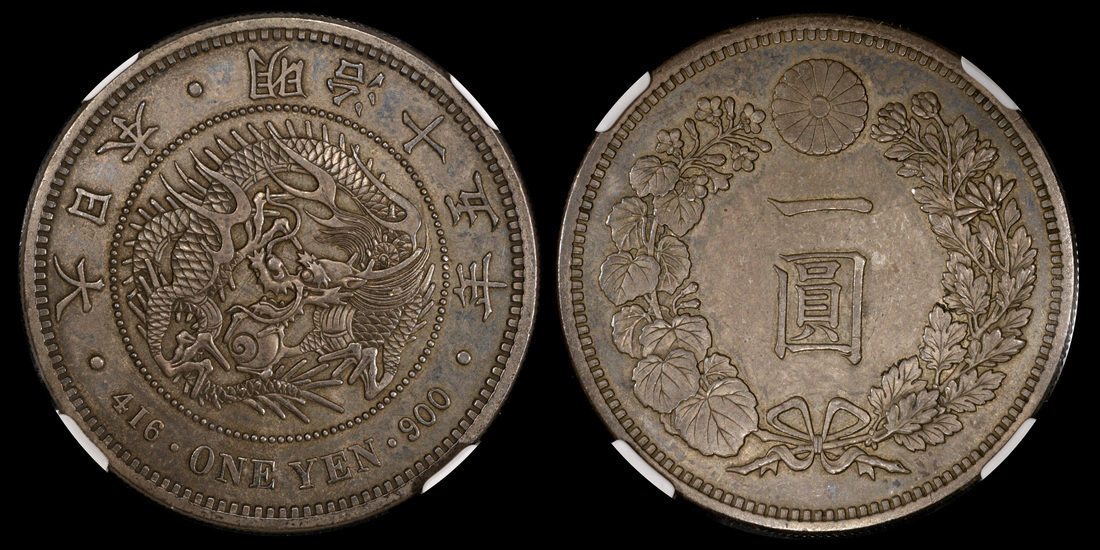 Meiji 15 (1882), NGC AU-58.  I was completely unable to catch the underlying (if muted) luster under the toning.
The 'gin' counterstamp.  Literallly means 'silver'.  The one yen coins were theoretically removed from circulation and stamped for export and use overseas.  The Osaka mint placed the gin mark to the left, and the Tokyo mint placed the gin to the right.  Far more were counterstamped in Osaka, about 10 million vs 1 million.  Both coins were appallingly scrubbed at some point in their careers sadly. 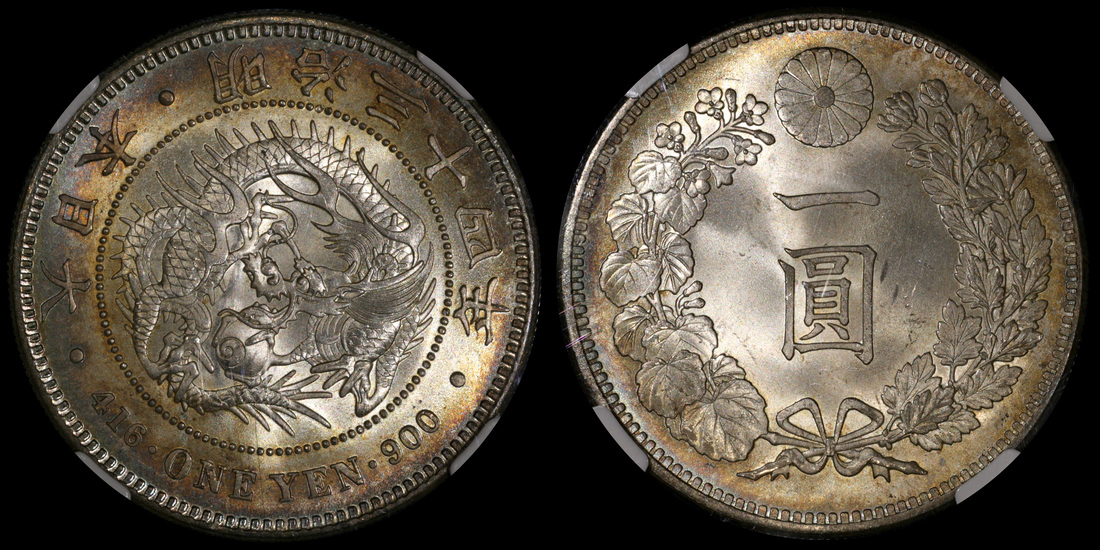 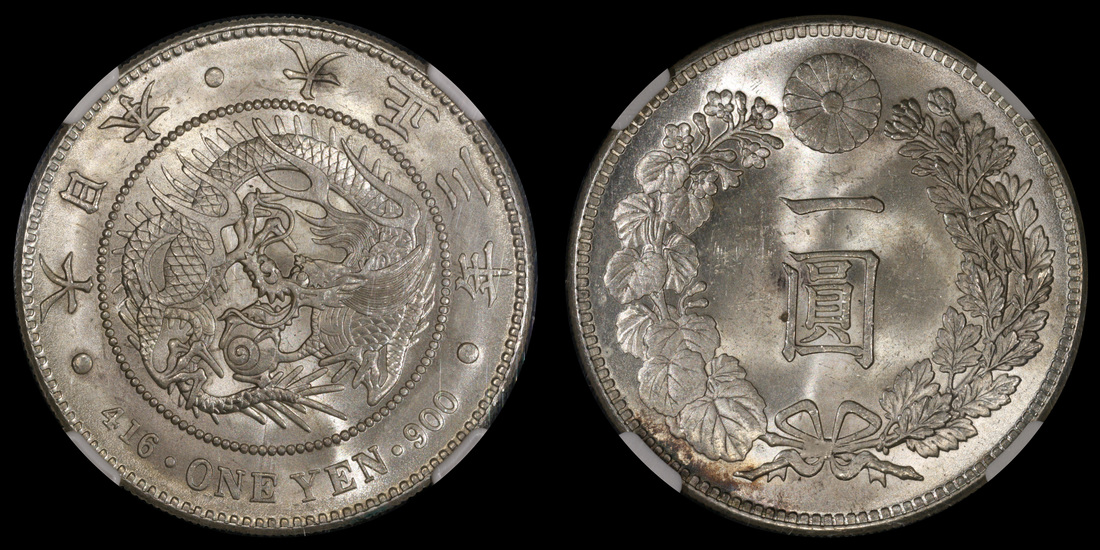 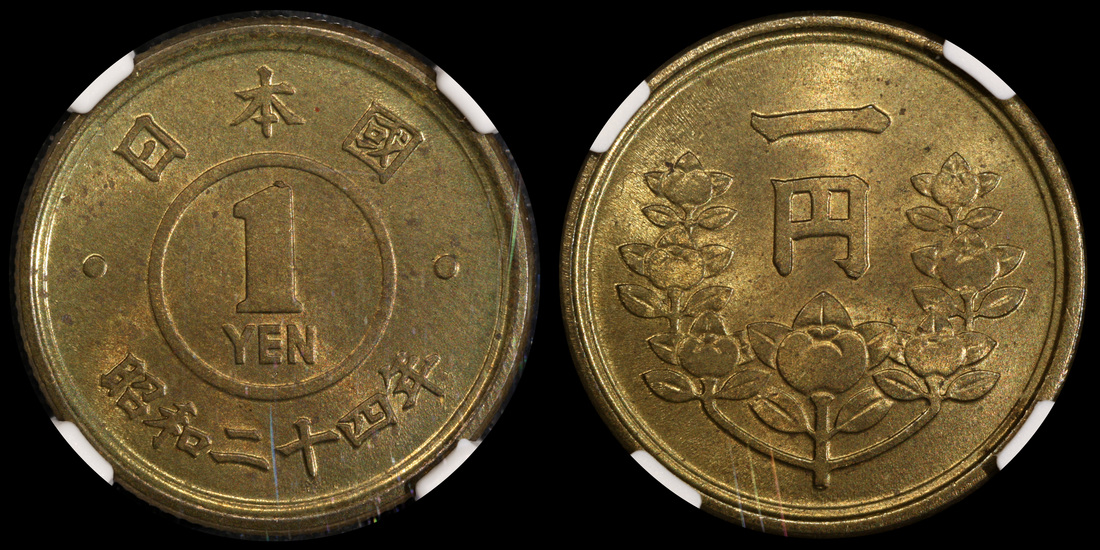